Classic Computers and Me 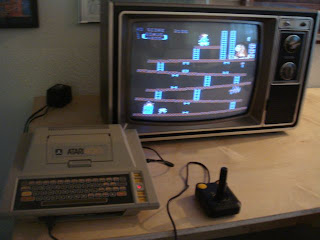 You may be wondering about the Donkey Kong.

Like many things, it started in the '90s. That's when I found myself in Silicon Valley surrounded by all these strange new "computers." Not traditional computers, but compu-gadgets. Things that go beep. Some fit in the palm of your hand and they were being invented all around me, I only had to reach out and grab them. Next thing I knew, I had a nice little collection of devices. Hey, my friend would say, if you like that you'll love this. Next thing I know I own Data General DG-1, fully loaded marvel of engineering and circa 1984, a miracle of rapid obsolescence. You can see where this is going. I began collecting anything interesting or unusual. I learned computer history, serial numbers, feature sets and options, prototypes. Study, tinker, hack. I signed up for volunteer work at the Computer History Museum where I learned how to properly handle, restore, and preserve them. 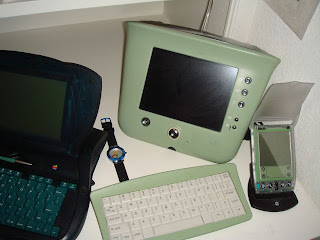 These are some classic touch-screen devices from the 1990s and the genesis of this hobby. On the left is an Apple eMate. They took a Newton and fit it into a laptop form for kids. This one is a prototype and was field tested by the 11 year old daughter of one of Apple's engineers. It still has a letter to mom and dad and some doodles in its flash memory. You can see an Apple promotional wristwatch next to it. In the middle is a 3Com Audrey, an "Internet Appliance" built in the Judy Jetson style. It has a wireless keyboard and when you have email, the clear stylus on top blinks like an antennae. To the right is the Palm IIIe Special Edition that got me through the dot com bubble with hip tech cred. I had the Star Trek communicator sound effects installed. I flipped it open and said beam me up Scotty way more than I should have. I have since found a US Robotics Pilot (the predecessor of them all!), a IIIc Color, and a Palm VII Wireless which has special sentimental value as I built the developer site for that puppy. 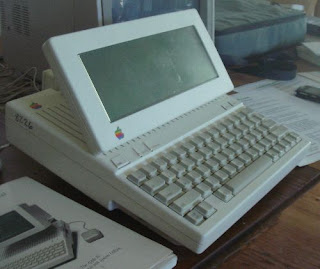 This Apple //c with the rare flat-panel display was just a good deal on eBay. I couldn't pass up the chance to own one! It's complete with the original software, manuals, carrying case, and a lapel pin.

Finally, my most funnest toy... 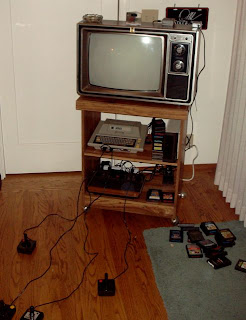 Have you played Atari today? That was their slogan. That's a 2600 and a 400 with a large collection of games and a 1979 color television, all on a rolling TV cart. Nothing in this picture was built after 1984. It's a period piece I put together for the vintage computer festival. Everything is there and it all works. I enjoy a game of Joust once in a while. Or Warlords if company is over.

You can see in the view from the top, it has the vintage switches on proud display. Even some Atari corporate swag. Now that's home computer history! 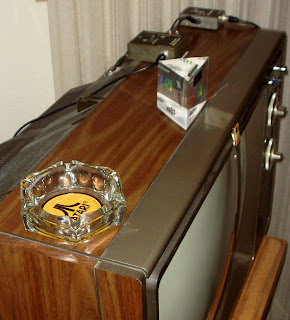