To be honest, when I said I want to keep my doctor it was just an experiment.

I've never been able to keep my doctor. Continuity of care seems like a great concept but it's something I've never experienced. I've seen my current doctor a total of 3 times in the 3 years he's been my doctor. I got this doctor l like I got all my doctors: my health coverage changed when my employment situation changed. Optum, the Health IT company and United Healthcare subsidiary, bought Axolotl, the HIE company where I worked. They gave me this new high deductible HSA PPO they believe is the wave of the future and will ultimately bring down the cost of health care by putting the first few thousand dollars of cost on me, motivating me to spend more wisely. That's the theory anyway, as I saw it pitched by Tommy Thompson (HHS Secretary under President Bush) and UHC executives.

I left in July to join a small consulting firm. I'm still working in the HIE field but now I'm buying my own insurance. My intention was to pay for COBRA until the end of the year, then buy either an exchange plan or a private one, depending.

United Health is not on the exchange and is in fact pulling out of California's individual market altogether. They were never big here anyway and the number of individual subscribers probably didn't justify the administrative expense.

I checked out the exchange plans, and I have my choice there. It's not everything I want but it's darn close, a bit cheaper, and feels safer. If I ever feel slighted or wronged by the exchange in any way, I know I'll have an army of Angry Republicans marching to my defense as they have been wont to do of late.

Now it's time to explore the individual private market, that vast free market jungle out there. I feel like I should be wearing a pith helmet.

As with many things, it started with Google, which showed me a paid ad for eHealthInsurance.com 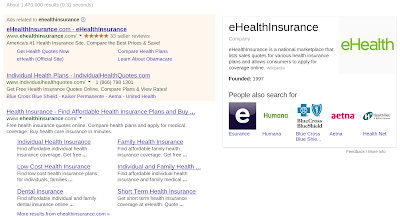 It asked me basically the same questions through the same procedure - the doctor search worked - and it sent me to the Blue Shield of California web site, where I saw the same plans for the same price. The UI is more polished, and you can see how the cheaper plan may be great if you're healthy and nothing happens, but paying 40% of an emergency room visit instead of a simple $250 copay, that could hit pretty hard I imagine, and could lead to some interesting negotiations on the operating table ("What's that machine, doc? It looks expensive"). 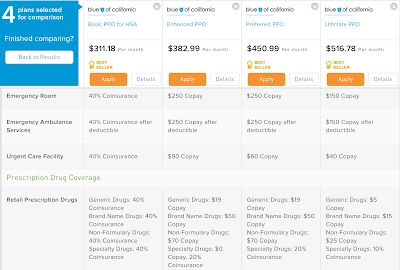 The cheapest plan on the exchange was $263 and the cheapest plan on eHealthInsurance.com was $294. I could get an HSA for around three hundred bucks, and with that I would have a $4500 deductible and a 40% copay beyond that, up to my yearly maximum of $6250. With the HSA I could contribute to $3300 a year tax free. The idea with an HSA is to start young so when your health fails and you start paying out that yearly maximum, you have enough to cover it. Rich people love it because you can contribute pre-tax dollars and invest it in the stock market, like a 401k. Unlike a 401k, you also withdraw it tax-free as long as you spend it on medical expenses. Like the individual mandate, the high-deductible HSA plan was another conservative idea embraced by insurance companies and incorporated into the ACA.

The non-HSA plans have a $2000 deductible. Between that and the lower copays, it seems like a less risky choice. I'll pay a bit more per month but a lot less if something happens.

Also, the exchange site is more responsive than it was last time. It's 7:21pm and I'm navigating through as fast as I can click. It wasn't like that the first week.

Buying insurance isn't as scary as I imagined. There is comfort in knowing whatever I buy will have a minimum level of coverage and no lifetime limits. The horrendous industry practice of rescission (actuaries actively looking for reasons to drop sick and expensive patients from their plans) is a thing of the past. I can buy any plan available without fear of hidden "gotchas" that might hurt me later when I need serious health care.

So starting January 1st, I'm off COBRA and on my new plan with the same doctor, the same benefits, and the same costs. I went back to CoveredCA.org to do the actual enrollment, and with another login and a few more clicks, I am signed up! My new coverage starts January 1st.